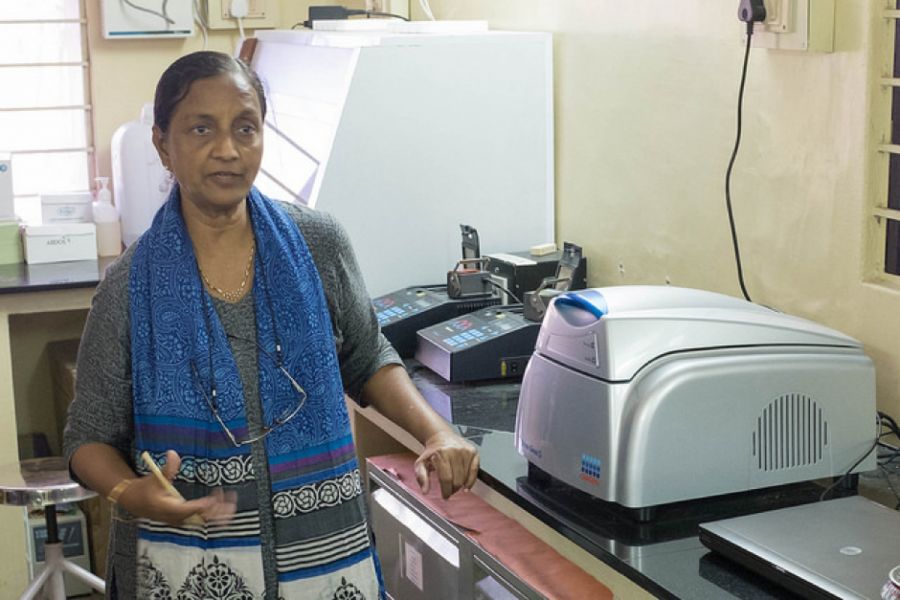 Catherine Vance (Dunshaughlin Parish), just finishing her studies as a primary school teacher, colourfully describes our day trip to Vadathorasalur.  This was another TLM hospital and also the location of a Vocational Training Centre where young people were studying in the hope of overcoming the barriers that a leprosy-affected family experiences.

On our third day in India, we were roused out of bed to be on a bus for 7.15am as we ventured on a four hour bus journey to Vadathorasalur (or Vada as we chose to call it!). Due to the terrifying nature of Indian roads, many of us chose to use these four hours to catch up on much needed sleep, while some of the braver members of the group took in the scenery and village landscape as we travelled. The purpose of our day trip to Vada was to visit a second Leprosy Mission hospital supported by The Leprosy Mission Ireland. At the hospital we were greeted by Dr. Ira and the director of the hospital, Dr. Chinnaraju. We were welcomed with what we came to know as the incredible Indian hospitality, each of us given fresh coconuts to drink from on arrival! Dr. Ira spoke to us about the foundation of the hospital and why the need for it arose, re-iterating what we had learnt previously about the horrific nature of leprosy and the stigma surrounding it. The hospital celebrated its centenary last year, which is an incredible accomplishment. After being refreshed we were brought on a tour of the hospital where we met a wide range of people.

Firstly we met three people, two women and a man, who have leprosy and were willing to share their stories with us. We learnt that leprosy most commonly affects the hands, feet and eyes and is actually a nerve disease. Shockingly, we discovered that this disease causes people to lose sensation and feeling in their hands and feet; one woman couldn’t feel her arm being tapped by the doctor. While it was wonderful to have these people share their stories with us, it was also quite hard to witness the difficulties they suffered. Throughout the day we visited both the men’s and women’s ward for people with leprosy, and once again we met with wonderful hospitality. Each patient was waiting for us with a flower, and on entering the ward we all approached different beds to receive a flower and spend some time talking to the patient there. It was such a simple gesture, and yet you could see that it meant so much to these people that we were willing to grasp their hands, hug them, and speak to them, when so many of their families have rejected them due to leprosy.

The wonderful hospitality continued into lunchtime where we were not only treated to a fantastic curry (cutlery provided especially for us!) but also to a show of traditional Indian dancing which was very entertaining and a nice insight into the cultural side of India. After lunch we moved on from the hospital and visited the Vocational Training Centre. This is a centre for young people, aged between 17 and 21, who have either been affected by leprosy or their families have been affected by leprosy. Many of these young people have had terrible tragedy in their past, and to see how hard they are working to build themselves a better future was inspiring. We visited six different centres; engineering years one and two, refrigeration and air-conditioning, sewing, mechanics and automobiles. In every room we were met with kindness and warmth; one group of young men presented us all with roses while almost every room had decorated signs to welcome Rev. Dr. Ken Gibson and his team! These young people are all being trained in different vocations in the hope that they will get jobs in the near future and be able to provide for their families. Although many of them were nervous around us at first, when we got talking it was impossible to drag us from the room; especially the younger contingency of the party! We thoroughly enjoyed meeting the young people, talking to them about their work and taking numerous selfies as well! At the end of the visit, several of us bought some t-shirts that had been made by the girls and boys in the sewing workshop to further support their work.

While it was a long and tiring day, the visit to Vadathorasalur was an eye-opening, amazing experience and gave us all something to think about on our return home. I think I speak for the entire team when I say it was worth the eight hours on the bus!