‘Mind Yourself’ reaches for the sky 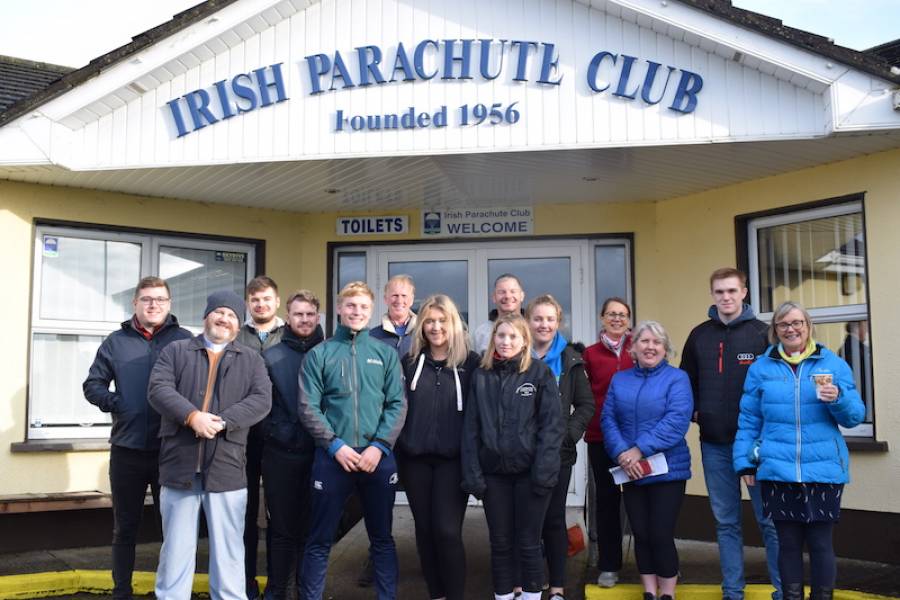 ‘Mind Yourself’ reaches for the sky

You could feel the excitement at Clonbollogue airfield on Sunday November. 12 people from across the dioceses of Meath and Kildare gathered at the home of the Irish Parachute Club, at the Co Offaly airfield to take part in a skydive. A clear blue sky meant it was a perfect day for it.

The parachute jump had been scheduled for the previous day. However, rain and gusts of wind meant that it had to be postponed. As well as the 12 who made the jump 2 further members of the dioceses, who couldn’t reschedule, are due to do their skydive in the very near future.

The sponsored skydive was held as part of the diocesan ‘Mind Yourself’ campaign. This is to highlight awareness of mental health. Men and women of all ages took part.

Each of the skydivers had raised their own funds to take part – with funds also being raised for Aware (www.aware.ie). Aware is one of Ireland’s most well-known charities addressing mental health.

Along with the 14 brave skydivers were teams of well-wishers, supporters and family. One of the really encouraging parts of this adventure has been the support and encouragement that has come from people across the dioceses and local communities as well. As one skydiver put it: “It’s been incredible to see the support from so many. When people heard about this they wanted to offer their support.”

Behind the 14 parachutists were a small team of organisers, Sharon Glynne and Rhys Kellet, from the dioceses who made it all happen. Everything from looking for volunteers to do the jump, encouraging sponsorship to providing food and refreshments on the day. Funds raised came in all sorts of ways – from direct sponsorship, coffee mornings and GoFundMe pages on social media – to support the work of Aware.

Bishop Pat Storey said “I am grateful for the fun, support and courage that this event has displayed. ‘Mind Yourself’ has grasped the imagination of so many around the diocese. Thank you to those who jumped and those who came to cheer them on.” She had planned to take part herself, but was unable to because of a broken wrist.

‘Mind Yourself’ is a diocesan project to highlight the importance of mental health and to signpost people to sources of help and support. Our partners in the year-long project include Aware, Church’s Ministry of Healing Ireland and Bishop’s Appeal.

Those who made their parachute jump on 10th November were Matthew Smith, Alex Kenny, Rev Martin O’Kelly, Gwen Clarke, Hazel O’Neill, Laura Carroll, Shane Buckley, Daniel Buckley, Richard Ross, Craig Claxton, Emma Gowing and Des Kenny. Ciara Maguire and Sophia FitzHerbert were unable to reschedule for this date and will make their jump in the near future.