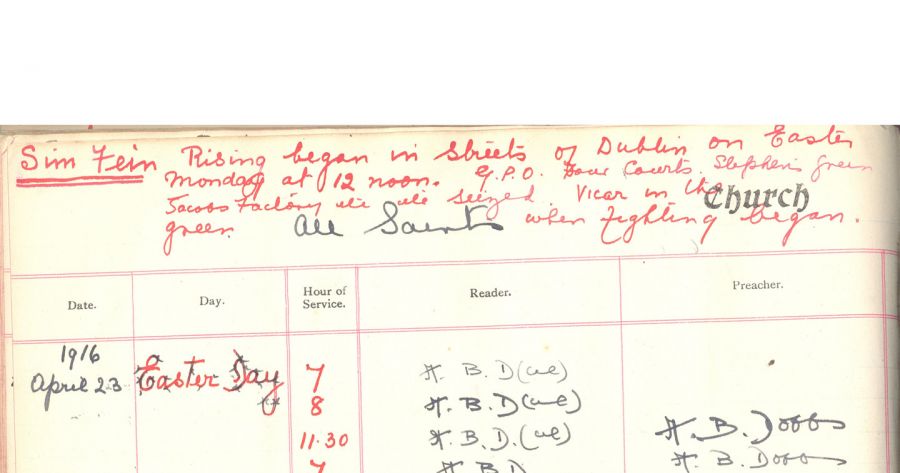 The writer Julie Parsons spent some time at the RCB Library last year analysing little–known Church of Ireland sources – including preachers’ books, parish magazines, vestry minutes and a variety of other parish resources. She then contributed an article based on and colourfully illustrated with extracts from these sources, published last year (for the year that was in it) in a commemorative journal (Irish Archives: the journal of the Irish Society for Archives) dedicated to “Hidden Pages” of the 1916 Rising.

Given the unprecedented demand for Valerie Jones’ book Rebel Prods covered here https://www.ireland.anglican.org/news/6872/final-available-copies-of-rebel a new collaboration with the ISA is making available copies of the journal which includes a variety of other articles as well as Julie’s, through the online bookshop at a special price of €9/£7.80+postage.

Irish Archives: Hidden Pages From the 1916 Rising is co–edited by Dr Susan Hood, RCB Librarian and Archivist, and Elizabeth McEvoy, Senior Archivist in the National Archives of Ireland. The concept of revealing hidden pages and dialoguing with the public was first envisaged by the ISA in 2015 in collaboration with St Patrick’s Cathedral. A seminar entitled ‘Hidden Pages from World War One’ saw archives professionals reveal their explorations of previously unknown archives to make the events of the First World War more accessible to people 100 years later. In the same spirit, a subsequent seminar was held at the beginning of 2016 to encourage nuanced debate on the complex topic of the Rising, demonstrating how hidden archives and the stories they contain can underpin a true understanding of significant historical events.

So Julie’s article, entitled “From ‘Cheerful day, good congregation’ to ‘The undiluted celt, a curse’: Responses to the Easter Rising and its Aftermath as Recorded in Church of Ireland Parish Registers, 1916–1925” draws on relatively obscure sources to bring to life the impact of events on particular Church of Ireland communities. Opening with an article published in the June 1916 edition Mariners’ parish magazine of the in Dún Laoghaire, county Dublin (or Kingstown, as it was known then), the editor apologises for its late appearance because of the Sinn Fein rebellion which disrupted life in the city centre. He then goes on to present in vivid terms the response of the Mariners’ parish to what we call the Easter Rising and its aftermath: “The Irish rebellion of Easter 1916 has brought out the worst and the best in Human nature. We do not wish to dwell further on the dark side and the horror of it.” (RCB Library, P368.25.3).

The ‘Cheerful day, good congregation’ piece appears alongside a variety of other articles providing colourful insight to other hidden aspects of events during the Rising. Colum O’Riordan, General Manager of the Irish Architectural Archive, takes the reader on a journey through the architectural legacies of 1916; Stephen Ferguson, Assistant Secretary of An Post, uses archives at the Postal Museum in London and An Post materials in Dublin, to explore the experiences of GPO staff during Easter Week, bringing to life a thrilling sequence of stories of how the city’s communications routings came to be re–established after the seizure of the GPO; the Wexford County Archivist Gráinne Doran examines the collective effort of the men and women in county Wexford during Easter 1916 and finally, Ellen Murphy, Senior Archivist at Dublin City Library and Archive, reveals reactions to the Easter Rising through the lens of Monica Roberts, the 26–year–old daughter of the Vice–Provost of Trinity College Dublin, who kept a diary of events in a 33–page Pitman exercise book.

Julie Parsons comes from a family with a long line of Church of Ireland clergymen. When she decided to research the reactions of the Church of Ireland clergy to the Easter Rising and its aftermath, using preacher’s books and vestry minutes, she sought out clergymen to whom she was related. Her article, therefore, features Canon Harry Dobbs, vicar of All Saints Blackrock, who was her stepfather Peter Dobbs’ father and the Revd Hamlet McClenaghan, rector of Dunshaughlin, her great–uncle. Both gave her valuable insights into the feelings and immediate responses to the changes which were taking place in the political, social and religious life of Ireland in the early 20th century. Her new novel The Therapy House is set in contemporary Dún Laoghaire but draws on original research which Julie conducted into the people of the Mariners’ Parish, where her grandfather, Canon George Chamberlain, was rector from 1925 until 1959.

To order your copy of the journal, including Julie’s illustrated article, at the special price of €9/£7.80+postage please click here