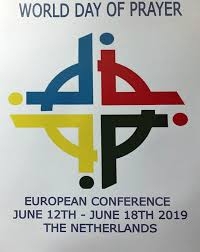 As a member of the WDP Irish National Committee, I had the privilege of attending the triennial WDP European Conference last June In Lunteren in The Netherlands at which the theme was ‘A Story to Tell, A Call to Act’.

It was a very full agenda and each day began and closed with Prayer, led by the various countries attending.  The Conference kicked off with a potted history of the WDP movement worldwide presented by Helga Hiller, from its lowly beginnings in 1812 to the present day.  Jean Kenny and I read the parts of Lucy Peabody and Helen Barrett Montgomery (two ladies who were hugely involved in making the movement what it is today) in one section of this presentation.  Next on the agenda was a Bible Study based on Luke 13, 10-17 presented by Rebecca Onderstal and Riëtte Beurmanjer.   We learned about the ‘Thursdays in Black’ movement set up to express solidarity with abused women and children around the world.  We also learned about the Prayer Partnership network within the WDP movement – Ireland’s prayer partners are Georgia and Slovenia.  The evening closed with a joyful, lively and uplifting concert by an African Choir.

Day 2 found us listening to a presentation by Roseângela Oliveira (International Executive Director of WDP) who is Brazilian and living in the USA and Laurence Gangloff (International Chairperson) who is French, based on the conference theme – ‘A Story to Tell, A Call to Act’.  That afternoon the Bible Study was presented by Ulrike Bechmann and was based on the theme for the 2020 Prayer Service prepared by the Women of Zimbabwe – ‘Pick up your mat and go’ (John 5, 1-9).  The evening closed with a prayer walk in the grounds of the conference centre.

On Sunday we attended a Service of Worship at the Conference Centre led by the members of the Salvation Army, who were among the delegates attending – including our Irish National President, Major Gillian Dicker.  Followed by a ‘Plenary WDP in Europe’ session entitled ‘European Women, move on’ led by Emmanuelle Bauer from Luxembourg and Senka Sestak from Bosnia.   After lunch we left the Centre to visit with the local Molaccan (originally from the Indonesian Islands) Community who gave us a wonderful welcome and hospitality and performed some music and songs.  On return to the Centre we had a ‘Culture Night’ where each delegation had an opportunity to present an item unique to the culture of their country.  This was a wonderful evening of song, dance, poetry, recitations and reflections.  The Irish delegation gave a rousing rendition of Molly Malone!

Day 5 consisted of various Workshops including one session about how to set up and work a WDP Committee.  That evening we attended a very moving Closing Service, led by Zimbabwe who have written the 2020 Service.  We lit a candle for Peace and exchanged ‘travel gifts’ (a little memento from each country to the other delegations).

Next morning, we packed and departed after breakfast, amidst many farewells and promises to keep in touch from all the new-found sisters in WDP.  The Irish delegation (four) made our way by train to the small town of Heemstede, not far from Amsterdam where we had taken an AirB+B house as a base for a couple of days sightseeing.  We spent a wonderful day in Amsterdam where we visited many of the world-renowned sights of this beautiful City – too numerous to list them all but including the Rijksmuseum, Anne Frank House, Rembrandtplein, Gassan Diamonds, and the inevitable Windmills.  We spent a second day visiting other local places including Zandvoort and Haarlem and its Great Church, St. Bavo’s.  The last day of our sojourn saw us up extra early and on the train to Antwerp in Belgium, where Veronica Kuchenbecker, whom we had met at the conference, collected us from the fabulous train station and brought us to her home for refreshments, provided us with city maps and gave us some pointers of where to go and what to see.  The intrepid four set off and had a wonderful day visiting among other places, the Botanical Garden, the MAS Museum, Reubens House and the Cathedral where we marvelled at the collection of works of art.  We met Veronica again for a lovely meal in a local restaurant and an Irish friend of hers joined us for coffee at the end.  Great fun and chat!  There were four rather tired individuals on the train back to Heemstede that evening.

The WDP Service is held in 140 centres in Ireland each year, usually on the first Friday in March.  The Prayer Services begin in Samoa and as the day progresses a continuous wave of prayer spans the globe to include all peoples, nations, languages and traditions.

In 2020 the Service will be recorded in RTÉ on 9th February when Laurence Gangloff (International WDP Chairperson) will participate.  It will be broadcast on radio and television at 11a.m. on 29th March.

The Annual WDP Services will take place on Friday, 6th March 2020 – theme ‘Rise – take your mat and walk!’ – prepared by the women of Zimbabwe.